There is a good news for people who like various night modes. With the latest Insider Preview build featuring references to a work-in-progress dark mode, Microsoft is finally adding a dark mode to File Explorer on Windows 10.

Windows 10's dark mode is an awesome feature that allows people to switch most apps and system elements into a darker theme, which is easier on the eyes, and looks awesome. Unfortunately, the dark mode in Windows 10 has been rather inconsistent in where it is applied; when dark mode is enabled you can find it in most system apps, a few third party apps, and a few system elements. However, it was always missing from the File Explorer. 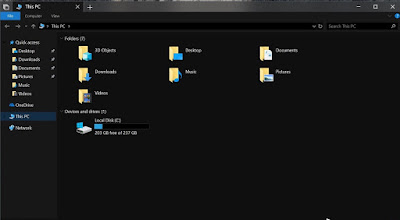 But this problem won't be lasting for long time, because Microsoft is trying to bring support for dark mode to the File Explorer on Windows 10. It's the full, fat, Win32 File Explorer, and it's getting the dark mode treatment. Early References of this new dark mode can be found in the latest Redstone 5 Insider build, but it isn't fully enabled in that branch yet. Microsoft is working on this feature internally.
Once ready, enabling dark mode in File Explorer is done with the system-wide toggle found in the Windows Settings app, which makes all your other apps dark too. The screenshot above is of an early version of dark mode in File Explorer, which maybe change before it's finalized.

Coincidentally, the source code of WebKit shows it seems that Mac OS 10.14 is also going to support the true night mode.